I’ve been on the verge of a cold all week, it’s that time of the year I guess. At least I have a nice cozy comfy chair and blanket from Collabor88 to snuggle up in! You can have this too, … END_OF_DOCUMENT_TOKEN_TO_BE_REPLACED

I really don’t care if it’s “lame” – I absolutely love the Christmas season. I love everything about it, warm fuzzy sweaters, holiday lights, and even the crowds of shoppers hurrying up and down Michigan Avenue. However, here are the … END_OF_DOCUMENT_TOKEN_TO_BE_REPLACED

Sometimes it’s nice to walk around SL and experience the simple things in life. My friend Kae’s sim It Starts With a Smile allows you to do just that. Kae (and I’m guessing that craxy Maxxster had something to do with it too) put an incredible amount of thought into each and every detail and the position of each adorable prop. It is now one of my favorite places in SL. Thank you for creating it!

The lovely fountain! I thought this was the perfect location to show off my new goodies from Collabor88! This outfit from Nylon Outfitters is absolutely adorable.

One scoop or three??? THREE! – The Fluidity poses by !Bang are still available at Zodiac, but only for a few more days! So hurry up and hit the !Bang kiosk while you can!

The centerpiece and inspiration for this entire outfit was the GORGEOUS new skin from AUXillary out now at Collabor88. It comes with 2 skins, one with light brows and one with dark. I am absolutely in love with it. The picture above is completely unedited so you can see how it would actually appear inworld! Stunning!

Take care of each other and Happy Shopping!

When I was in my early 20’s, I was a singer in a local cover band. We fancied ourselves as the angsty messengers of our misunderstood generation and we gave it everything we had. Sure most of the time we played other people’s songs, but we did it with passion as if each and every word, note and riff came straight from our hearts. I still remember someone coming up to me after a set where I did a particularly snarly rendition of “You Ought-a Know,” of Alanis Morrisette fame, and asked me “how does someone so little and perky sing with such a strong, angry voice?” To me, the answer was simple, as soon as I stepped on to that stage, and felt the hot glare of the lights, I became someone else.

No longer was I that quiet young girl that wanted desperately to be accepted, with her innocent face and doe-like eyes. From the first count off, to the last round of applause… I became Dorothy from the Wizard of Oz, possessed by the ghost of Courtney Love. And I loved it.

I’ll bet that ‘s probably the reason that I love SL so much. I get to step outside myself and slip into someone a little more creative. Mostly, I think it suits me.

Skin: Faith in Natural with rust lipstick and gold eyeshadow by Izzie’s

Necklace and Earrings: Aletta Catwalk (open) in Gold by Maxi Gossamer for Collabor88

You know back in the day when it was the “thing” to get your “colors” done? Well, I was an autumn. To this day, I still get giddy when the air starts to turn crisp and the kiddies go back to school. In my worlds, all of them, Autumn pretty much rocks.

That’s why I had such a hard time choosing which of the Aux Mullet Tops to choose from at Collabor88, because they all had that sort of Autumn hue going on. I settled on the Salmon color because it matched these awesome pumps by Handwerk I picked up (also at Collabor88).

Everyone and their brother has been showing this awesome shirt with a pair of skinny jeans, but I took these pictures on Sunday and I didn’t plan on leaving the house, so I didn’t bother putting on pants. Yes guys, sometimes we girls like to sit around in our undies too!

Sometimes… we even wear heels.

Shirt: Mullet Top in Salmon from AUX for Collabor88

Shoes: Rose Pumps in Tangerine from HandWerk for Collabor88

Pose: One of the “Simply” poses from BENT ❤ 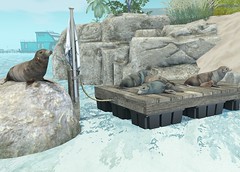